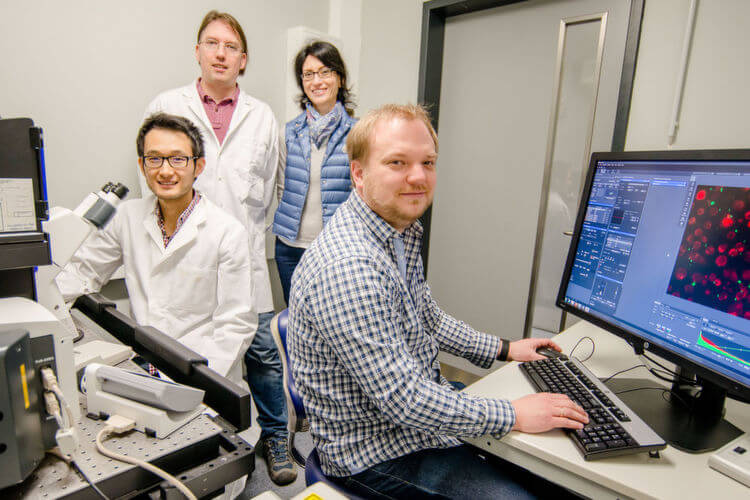 03/06/2018 German researchers from Bochum film the evidence under the microscope: Our immune system uses bleach to kill bacteria! The bacteria are apparently showered by certain white blood cells with a cocktail of toxins that includes chlorine bleach.

A team of researchers led by Prof. Dr. Lars Leichert, head of the Biochemistry of Microorganisms research group, Prof. Dr. Konstanze Winklhofer from the Department of Molecular Cell Biology at the Ruhr University Bochum and Prof. Dr. Andreas Meyer from the University of Bonn were able to observe under the microscope for the first time how immune cells deal with pathogenic germs thanks to newly developed fluorescent proteins.

“When bacteria enter the bloodstream, neutrophil granulocytes, the most abundant white blood cells, are the first line of defense. They literally eat the invaders, a process called phagocytosis. In doing so, they swallow the bacterium and shower it with a poisonous cocktail of so-called reactive oxygen species. These include hydrogen peroxide, which is also found in many antiseptic agents, and chlorine bleach. These substances destroy the molecules of the bacterium by oxidation, a chemical combustion process.”

The full article on this important research success is here Link Archive Study.

Oral ingestion of chlorine dioxide (MMS) is harmless to higher organisms, according to Wikipedia. This has also been consistently confirmed in many large studies by the WHO and EPA. Otherwise, chlorine dioxide could not have been used worldwide for decades to treat drinking water. In addition, in many countries of the world including the USA, it is allowed to dip almost all foods such as meat, fish, fruit and vegetables in chlorine dioxide baths and then pack them without further treatment. Chlorine dioxide decomposes only into water, oxygen and very small amounts of common salt. If chlorine dioxide were harmful to our drinking water and all our food, or to those who consume it, it would have been banned long ago. Such exonerating studies are NOT available on chlorine bleach and there are also no reported healing successes! In addition, it is not yet known how the body uses this substance locally and neutralizes it again.

In contrast to the bleaching agents mentioned above in the research success, such as hydrogen peroxide and chlorine bleach, chlorine dioxide is a very weak bleaching/oxidizing agent. While it can kill pathogens such as bacteria, viruses, fungi and small cell parasites, it cannot harm body cells due to its redox potential.

Any cookies that may not be particularly necessary for the website to function and is used specifically to collect user personal data via analytics, ads, other embedded contents are termed as non-necessary cookies. It is mandatory to procure user consent prior to running these cookies on your website.